Not too many kids this year, as usual. Some wore really cute costumes. Lot of temporary pink, purple temp hair colors! I was happy to see adults, sometimes both parents, with them. All were very polite and thanked me for the candy. There were no smirky attitudes as I've seen sometimes in years past. Very refreshing.
The next few weeks will probably fly by, as usual. The time between Halloween, then Thanksgiving, then Christmas, goes so fast. I'll try to concentrate on each day as it comes, maybe that will slow the passage of time a little.
But one day I can't help looking forward to is December 13. That's the release date my publisher, The Wild Rose Press, has announced for the new edition of my novel, Disguise for Death!! 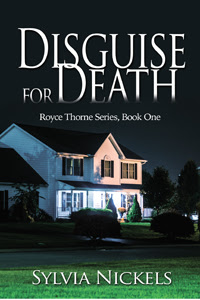 Posted by Sylvia at 9:48 PM No comments: Links to this post

Lamb to the rescue!

Two posts in April! Wow, I'm on a roll. Still a little euphoric about the new book contract. Am anxious to begin working with editor on edits. Will be that much closer to publication of the new edition of Disguise for Death. Am also working on my third book in my Cam Lock, PI series. Title still up in the air. It will come. But I hit kind of a roadblock and have avoided working on the manuscript for a few days. Trust Kristin Lamb to come up with a blog post I think is going to help me get back into the story.
Kristin's blog post
Thanks, Kristin!
Now to get back to work.
Posted by Sylvia at 1:21 PM No comments: Links to this post

I didn't get a new post in for March, but hey, good news is worth waiting for, right? (cue drum roll) I have a new publisher! Just signed a contract with The Wild Rose Press to publish a brand new edition of my novel, Disguise for Death. The book features Royce Thorne, widowed writer who turns amateur sleuth to clear her husband's son, accused of murder. I'll be working with my assigned editor to polish and improve the manuscript. No timeline for release since we have just begun the process. Stay tuned for more information.
Posted by Sylvia at 1:15 PM No comments: Links to this post

February, a short month that holds Groundhog Day, the day for lovers, Valentine's Day, President's Day to honor two historical Presidents and every four years, Leap Day, February 29. Now there are four varied items as prompts for a story. Maybe I'll take a shot at it.

The weather in February is usually kind of nasty, if not snow and ice, at least cold rain and ice. This has not been the case in my area, though I know others to north and west have experienced some pretty nasty weather. Perhaps our time will come before Spring really shows off her finery. The unusually warm days here have deluded some flowers and plants into popping up. Some probably will not get another chance this year, if we do get hit with some really cold and snow later this month or in March.

I've not been as diligent in writing new stuff as I might have if the weather had been worse and I'd been stuck in the house. That's probably just an excuse, but a writer will snag any excuse that's handy. Trust me. Actually I do have a good start on my third entry in the Cam Locke, PI, mystery series. I like the storyline I have in mind and think it should be just as good as the first two. Well, some readers have told me they think the novels were good and I choose to believe them!

There could be some good news to share this month. I hope so. Stay tuned. And stay warm, if you're in a more frigid clime than East Tennessee.

Posted by Sylvia at 5:24 PM No comments: Links to this post